This package contains utilities to use Human Connectome Project (HCP) data and HCP-like data (e.g. obtained from legacy data using ciftify) as well as corresponding parcellations with nilearn and other Python tools.

The HCP data differs from conventional volumetric fMRI data which records the BOLD signal from each voxel in a 3D volume in that the signal from the cortical surface is treated as a folded two dimensional surface, and hence the data is associated with vertices of a predefined surface mesh, while the subcortical structures are described volumetrically using voxels.

The CIFTI (more precisely CIFTI-2) file format encompasses both the cortical 2D surface data as well as the subcortical volume data. However, only the voxels associated with relevant subcortical structures are kept. Thus these data are quite richly structured. Although the standard Python tools for dealing with fMRI data like nibabel can read both the CIFTI-2 files containing the fMRI signals and the GIFTI files containing the surface mesh definitions, there is not much that one could do further out-of-the-box, in particular visualization using nilearn or processing parcellated data using e.g. machine learning tools which work exclusively with numpy arrays. The goal of this package is to ease the interoperability of HCP data and these standard Python tools. 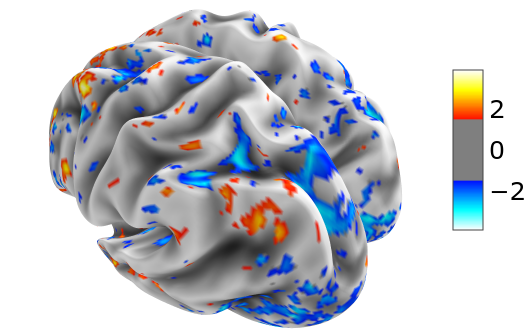 The utilities mainly deal with plotting surface data, accessing the predefined subcortical structures as well as using various parcellations and identifying connected components on the cortical surface. Various helper functions aid e.g. in mapping the HCP fMRI cortical data to surface vertices for visualization etc. The functions work directly with numpy arrays of shape Tx91282 or 91282 for fMRI data, with T being the number of time frames, while 91282 is the standard HCP dimensionality for the 3T cortical surface and subcortical data.

Make sure that you have the following packages installed (e.g. using miniconda)

Here we assume that the commands will be run in a Jupyter notebook as this allows for rotating and scaling the 3D plots with your mouse.

which corresponds to 700 time-steps and 91282 grayordinates.

The CIFTI file format for HCP 3T data partitions the 91282 grayordinates into the left- and right- cortex as well as 19 subcortical regions. We can easily extract say the signal in the left hippocampus using hcp.struct

The other available regions are

For convenience we define a function which normalizes the data so that each grayordinate has zero (temporal) mean and unit standard deviation:

In order to plot the cortical surface data for the whole bran, one has to have the surface meshes appropriate for HCP data and combine the ones corresponding to the left and right hemispheres into a single mesh.

hcp_utils comes with preloaded surface meshes from the HCP S1200 group average data as well as the whole brain meshes composed of both the left and right meshes. In addition sulcal depth data is included for shading. These data are packaged in the following way:

Here white is the top of white matter, pial is the surface of the brain, midthickness is halfway between them, while inflated and very_inflated are mostly useful for visualization. flat is a 2D flat representation.

In order to make an interactive 3D surface plot using nilearn of the normalized fMRI data (thresholded at 1.5) at t=29 on the inflated group average mesh, we write 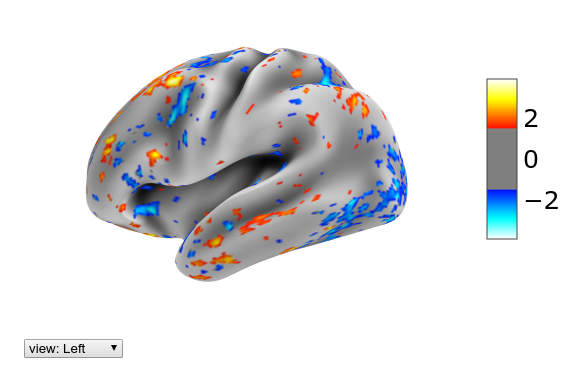 The group average surfaces are much smoother than the ones for individual subjects. If we have the latter ones at our disposal, we can also load them and use them for visualization.

Here as an argument we give just one example filename and hcp_utils will try to load all other versions for both hemispheres and the sulcal depth file assuming HCP like naming conventions (the .R.pial part here).

Let’s look at the same data as previously, but now on the inflated single subject surface: 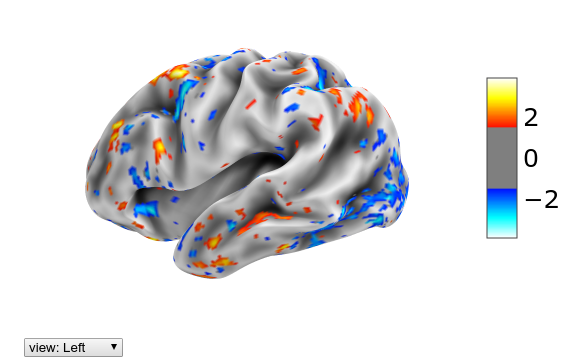 hcp_utils comes with a couple of parcellations preloaded. In particular we have the following ones (where we also indicated the name of the variable with the parcellation data)

All the labels and the corresponding numerical ids for these parcellations are displayed on the parcellation labels page.

The data for a parcellation contained e.g. in hcp.mmp has the following fields: 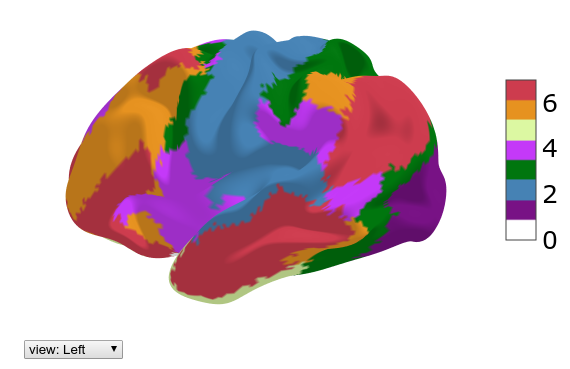 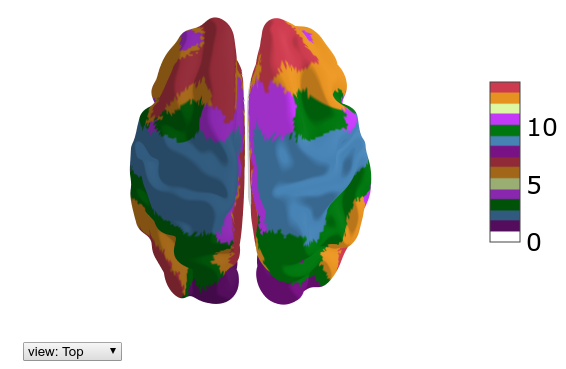 The main use of a parcellation is to obtain the parcellated time series (by taking the mean over each parcel) for further analysis. This can be done through

One could e.g. take the maximum by writing instead

For visualization it might be interesting to plot the parcellated value on each location of the brain. For that we use the unparcellate(Xp, parcellation) function: 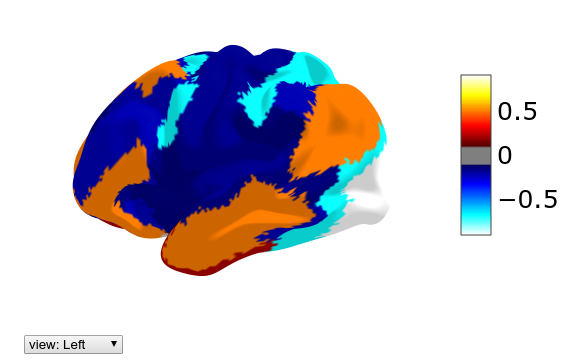 If we wanted to focus just on the activity in the somatomotor network of Yeo-7, we can mask out to 0 the remaining parts of the brain using mask(X, mask, fill=0). This is of course only useful for visualization: 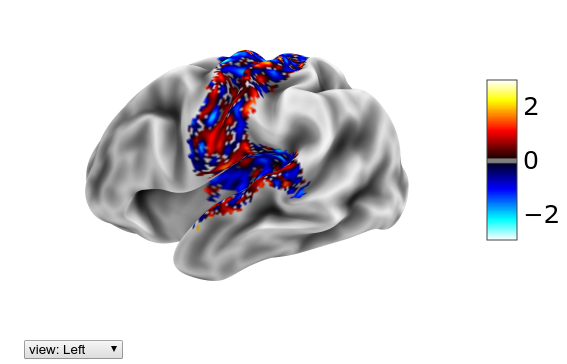 Finally, once we have parcellated 1D data (e.g. a snapshot in time or the results of some analysis), we can order the regions according to the values using the function ranking(Xp, parcellation, descending=True): 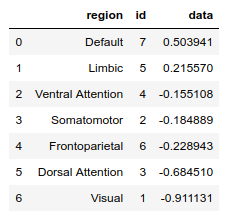 The above function returns a Pandas data frame which of course can be used for further analysis.

Once some computation on the cortex data has been done and some boolean condition determined, it may be useful to decompose the region where the condition is satisfied into connected components.

cortical_adjacency is the 59412x59412 (sparse) adjacency matrix of the grayordinates on both hemispheres of the cortex.

The decomposition of the region where the boolean condition is satisfied into connected components is done by the function cortical_components(condition, cutoff=0) which returns the number of components, their sizes in descending order and an integer array with the labels of each grayordinate (0 means unassigned, labels ordered according to decreasing size of the connected components). If the cutoff parameter is specified, components smaller than the cutoff are neglected and the corresponding labels set to zero.

E.g. if we would insert a condition which is always true

we would get just the two cortical hemispheres as the connected components.

A more realistic example would be 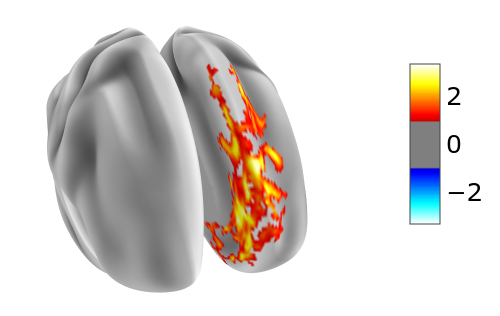 These group average files are redistributed under the HCP Open Access Data Use Terms with the acknowledgment:

“Data were provided [in part] by the Human Connectome Project, WU-Minn Consortium (Principal Investigators: David Van Essen and Kamil Ugurbil; 1U54MH091657) funded by the 16 NIH Institutes and Centers that support the NIH Blueprint for Neuroscience Research; and by the McDonnell Center for Systems Neuroscience at Washington University.”

When using the included parcellations, please cite the relevant papers, which include full details.

This package was initiated as a tool within the project “Bio-inspired artificial neural networks” funded by the Foundation for Polish Science (FNP).